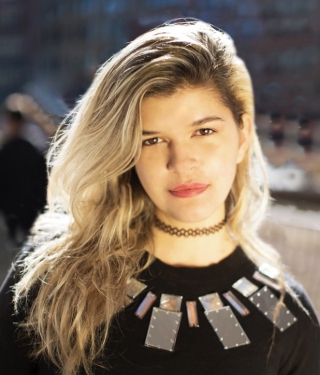 Brief description/inspiration/background story about the collection: The CONCEPT of my collection “White and the Maiden” was to examine the different notions of death in occidental and oriental culture. In the Asian world, death is regarded as an ethereal state, which is symbolized by the color white. This was the basis of my decision to create an all-white collection. The notion of death stands in strong contrast to the Western world, where the topic has been perverted and turned into something disgusting and unspeakable. It was my goal to create a sartorial memento mori to remind the viewer of our human mortality and the exilement of the dead from Western society.

Bio of the designer: Jamileh Nadelmann moved from her home in Switzerland to New York City, in order to pursue her career at Parsons. Since then, she has honed her craft through courses at Central Saint Martins, where her final project was featured in I-D Magazine. She has worked for internationally highly reputable companies including Diane von Furstenberg, Nicole Miller and Marc Jacobs.